Your children are an investment for you 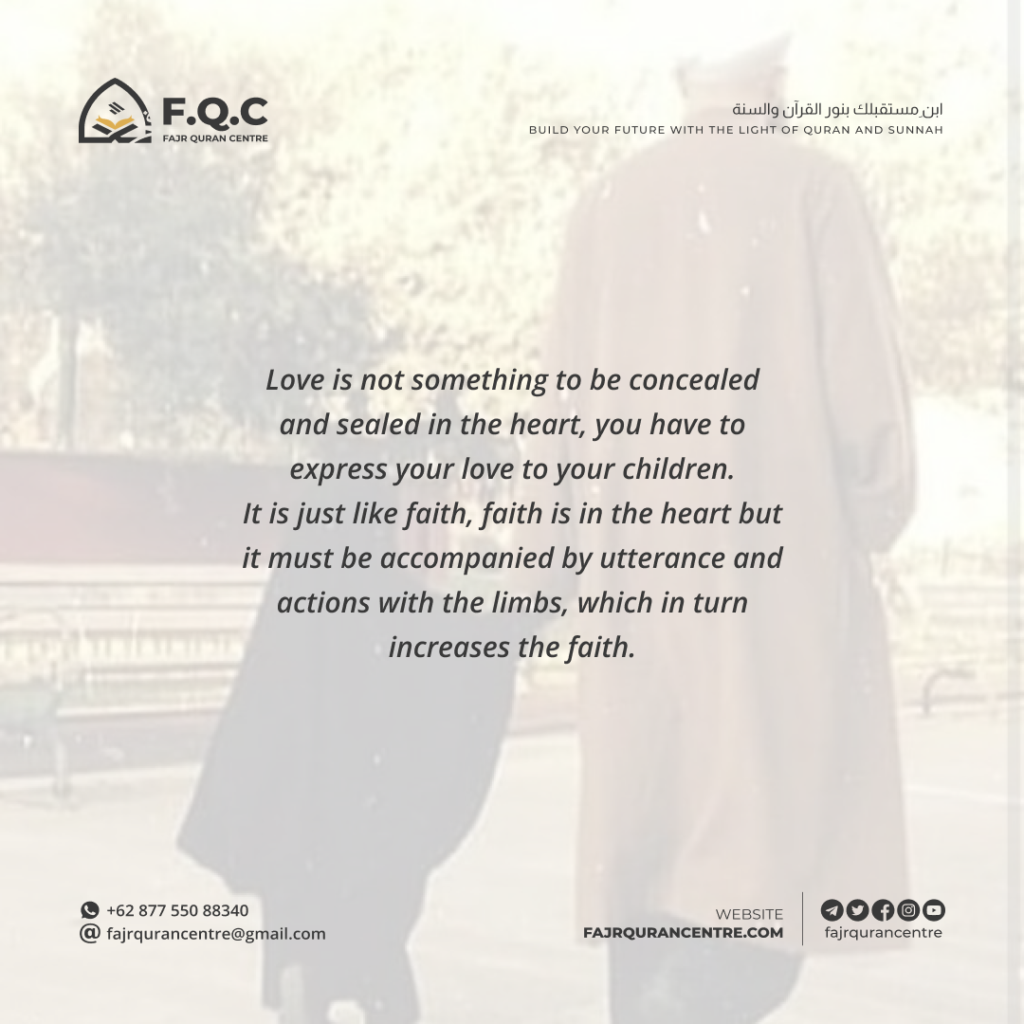 Love is not something to be concealed and sealed in the heart, you have to express your love to your children. It is just like faith, faith is in the heart but it must be accompanied by utterance and actions with the limbs, which in turn increases the faith. Love must be manifested in your actions and words too, it can be done in a combination of ways such as gestures, touching, cuddling, playing with them, giving them time, verbal expressions etc., even something as simple as talking to them about their day. When you do this, it brings about mutual love and admiration between yourself and your children.

When your children admire and love you, they will listen to you and execute what you want them to do. Building a good relationship and communicating with them, gently speaking with them, it’s all a part of faith. It may feel like a few minutes for you but children recall such precious few moments all their life.

Children are truly an investment, you reap what you sow. Giving them time brings up healthy children in a healthy and safe environment. As the saying goes, teach your children moral character and religious issues during and from the softness of their nails I.e., when they’re very small, early age, their nails haven’t even developed yet. Don’t forget that your children are an extension of your deeds after your death, if you raise them good, as it should be, they will be your shield from the hellfire!

Umar bin Abu Salamah رضي الله عنه was just a little boy and under the care of the Messenger of Allah صلى الله عليه وسلم. The Prophet gave him three different rules and he was just a young boy, the Prophet was advising a toddler, but he did it gently, nicely and kindly! When Umar ate with the Prophet his hand would roam around all over the dish,
The Messenger of Allah advised him: O young man,
1. Mention Allah’s Name (i.e., say Bismillah before starting eating)
2. Eat with your right hand
3. And eat from what is near you.”
Later in life, Umar bin Abu Salamah commented upon this saying, he never left off this rule all his life thereafter!

Children have dynamic minds, they are extremely intelligent and they pick up your actions more than your words when they are young. You see toddlers who cannot even speak but imitate the action of their parents, even when offering prayer. But this comes when you give your children love, care, attention and especially respect, they enjoy your company and they become attached to you rather than other things, they admire and respect you and they follow everything you say and everything you do.

My son, Ahmad, who was crawling at the time would tug the prayer rug from where I used to fold it away, he’d pull it down and prostrate on it. Imitating. This stagnant mentality that is portrayed to us today of the youth being irresponsible and incapable, and should be left for idle play is absurd and the reason for the downfall of society. Islam is not like that, the religion of Islam was raised on the shoulders of the youth who carried it far and wide! You must set the foundations of building a strong personality for your children right from the beginning, that is a priority that comes before anything else. Especially in such a poisonous and materialistic society that we are in.